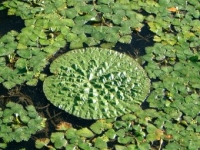 These aquatic plants ( known as "onibasu" in Japanese) grow in ponds, and have prickly spines on their leaves. Because Hikone Castle was constructed during the period of unrest following the great Battle of Sekigahara, these prickly water lilies were transplanted from Hikone's Matsubara Lake to the inner and outer castle moat as a protective measure: should the castle face attack, it was thought the plants would be an ideal mechanism to slow the onslaught of approaching soldiers.
The plants grow with their large leaves floating on the surface of the pond, but their annual bloom is not limited to one location, and frequently moves from year to year. The plants may bloom luxuriantly in one location one year, and not at all in the same location the next year. Their leaves grow on average to be one meter across, and rarely up to three meters. They are circular in shape, the tops of the leaves a glossy green, while their undersides are a red-purple color, and both sides are covered in prickles.
These water lilies grow in Japan on the main island of Honshu south of Niigata Prefecture, and in Shikoku and Kyushu, but they are an exceedingly rare sight within Shiga Prefecture, and as such this location where they bloom is considered quite valuable. The water lilies typically grow from early July to early August. 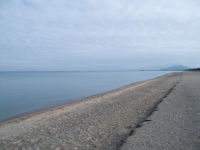 This swimming beach is located on the right shore of the mouth of the Echi River, in southern Hikone, just at the edge o… 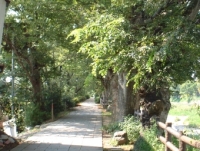 Zelkova Trees along the Seri River

During Hikone Castle's construction, the flow of the Seri River was shifted to its current position, and a series of lar… 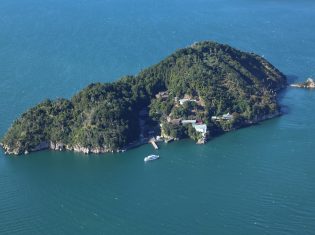 This little island has a circumference of 2 kilometers, and lies 6 kilometers off the coast of Hikone. It is home to Hog…