Before Hikone Castle was built, an ancient and miraculous temple stood on Mount Hikone, built to honor the late mother of Fujiwara no Fusasaki, provinicial governor to what was then Omi Province. The temple's primary object of worship was Fusasaki's protective deity, an image of the Buddhist goddess Kannon atop a golden turtle, Mount Hikone came to be known as the Mountain of the Golden Turtle (this is also the reason Hikone Castle bears the second name of "Castle of the Golden Turtle").
After its construction, Hikone Temple came to be known far and wide, and pilgrims came to worship there one after another, as if with no end in sight. As a general rule, these pilgrims would untie the fastenings ("renjaku") tying down their belongings here before climbing Mount Hikone.
Amongst the rock outcroppings that must have been used as seats by generations of elderly people removing their fastenings since the time of Fusasaki, this is a singular example. Perhaps afraid that this rock, too, might be lost, it is said that someone called this rock a "stomach pain stone" ("haraitaishi"), and so began the local tale that one's stomach will begin to hurt after touching the stone.
To this day, the stone is enshrined at the crossroads of Hikone's Renjaku-machi, and is referred to as the "Pilgrimage Sitting Stone."

The Serigumi group houses are located between the castle's outer moat (currently the Showa New Road) and the Seri River.… 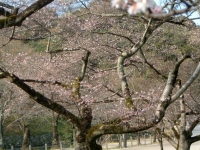 The cherry trees that grow in Konki Park, within the ring of the castle inner moat bloom twice yearly, in spring, from A…