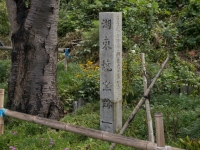 To the western side of the foot of Mount Sawayama, where the Omi Railway Main Line emerges from a tunnel towards Hikone, the remains of the very first koto-yaki kiln can be found.
Koto-yaki is said to have begun in the latter half of the Edo Period, in 1829, when a merchant named Hanbei Kinuya decided to install a kiln to make porcelain, what was then the cutting-edge in pottery and art, and invited imari porcelain artisans to Hikone. Initially, a kiln was constructed on Mount Sarashi, on the southern edge of the Seri River, but a problem with the kiln caused it to be moved to a different location, to Mochinoki Valley at the base of Mount Sawayama.

These pine trees line the central moat of Hikone Castle, an area that was referred to as "Matsu-no-shita" ("beneath the …

Shuzen Nagano was the right-hand man of Lord Naosuke Ii. During Naosuke's youth, spent sequestered in the Umoregi-no-Ya …